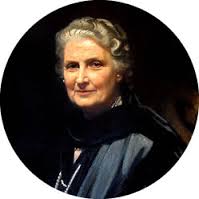 Maria Montessori was born in 1870, in a small village in Italy. When she was 5, her family moved to Rome where she discovered another world of libraries, museums, and galleries. Uncommonly, when Montessori was 13 she decided to continue her schooling and enrolled in a technical school to study engineering. Maria Montessori’s father was not happy with this decision as it was frowned upon for ladies to school into their teen years. Ladies were the homemakers. Fortunately, Montessori’s mother convinced her father to let her go.

After school Maria Montessori attended the University of Rome, where she studied to become a doctor, graduating in 1896 as the first female doctor in Italy. Once Maria Montessori completed her degree, she continued to work for the University, doing research and observations and became a member of their Psychiatric Clinic. She quickly became fascinated with trying to educate and help the ‘mentally retarded’.

In 1896 Maria Montessori gave a lecture about educating the mentally retarded- impressing the Italian Minister of Education so much that he awarded her the position of Director at the “Scuola Ortofrenica”, an institution dedicated to caring for and looking after mentally handicapped children. When eight of Maria Montessori’s children later took the state school examinations and gained higher than average scores, people called this the “Montessori Miracle”. Maria Montessori then realised that if she could educate handicapped children to a level of that of ‘normal’ children, then what would happen to the potential of ‘normal’ children should she educate them? She then decided to go out into the slums of Rome. Where she found poor, uneducated children to observe and teach. They too grasped her concepts and were successful in learning and being educated.

In 1907, Maria Montessori opened the first “Casa dei Bambini” or “Children’s House”. Here she built on her teaching skills, scientifically observing children’s abilities to absorb their surroundings and easily use and understand materials put in front of them. Everything that Maria Montessori used in her classroom – exercises, materials, equipment, methods was based on carefully observing children and what they did ‘naturally’ unassisted by adults. 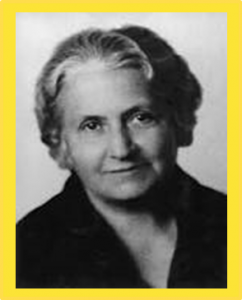 Due to her successful teaching methods, Maria Montessori was asked by the Prime Minister of Italy at the time – Mussolini, to teach her methods to the children who were being trained to become soldiers in World War 2. When Maria Montessori declined such an offer, she was exiled. In 1939 Maria Montessori accepted an invitation to India and moved there with her son Mario. It was here that Maria Montessori laid the foundations for the Indian Montessori Training Courses. Her work here resulted in her being nominated for the Nobel Peace Prize on three separate occasions.

Maria Montessori spent the remainder of her life in the Netherlands and died in 1952 at the age of 82. Her methods and observations have been used and carried out around the world and continue to do so today.

See below the video about Maria Montessori and how she developed this education system.